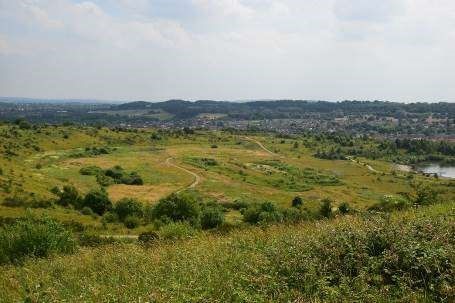 Located in North Staffordshire to the north of Newcastle-under-Lyme, Silverdale Country Park sits upon the former Silverdale Colliery. The local communities of Silverdale, Parksite, Scot Hay, Knutton and Alsagers Bank visit the site via its 8 mile network of paths for various types of recreation and conservation. The site is a mosaic of meadow, wetland and bare ground habitat with some woodland and scrub.

Meadows and wetlands occupy most of the Waste Farm half of the park to the west, with the other half of the site largely occupied by High Lane Void, which supports habitats typical of the post-industrial heritage of Stoke and Urban Newcastle as well as some wetland and pools.

The wetlands consist of managed flood attenuation pools, ditches and seasonal pools which control surface run off for the catchment to mitigate flood risks and provide connectivity with other sites via Lyme brook and Silverdale brook. These wetlands provide habitat for Great

Crested Newts (Triturus cristatus) and various other species including;

As a result of New Zealand Pigmyweed, desilting of seasonal pools has not been possible so most pools are succeeding to reedbed and attracting associated species such as Water Shrew (Neomys fodiens) and Water Rail (Rallus aquaticus). The construction of new seasonal pools have been recommended to maintain, enhance and create new wetland habitats and improve connectivity to existing Hibernacula.

The proposed project would significantly increase wetland areas providing both wildlife and community benefits. Wildlife would benefit from any habitat creation as well as controlling the spread of invasive
species which threaten connected sites. The community will benefit from increased capacity of flood water mitigation onsite.
Original Work Plan